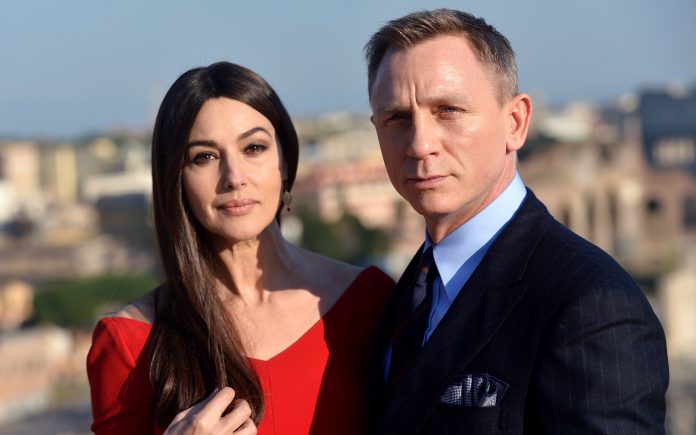 According to The List, Daniel Craig has expressed a desire for Monica Bellucci to reprise her role as Lucia Sciarra, for his upcoming and final appearance as James Bond.

This is unprecedented, for several reasons. Giving any former lover, especially one over the age of 25, even a second glance would be shockingly out of character for the aging rapscallion. Not to mention, Bellucci is 53 years old, and despite being almost supernaturally attractive, she is the oldest Bond girl in the history of the franchise, by a wide margin. In fact, she’s (gasp) even older than Craig himself.

Whether the rumor is true or not, it’s an interesting idea that the producers should seriously consider. I’m pretty sure James Bond would find a woman his age terribly intimidating, but perhaps Craig understands that the character needs a new challenge.

The world is changing, and Bond is an elderly character, with old-fashioned values. The recent films have even started acknowledging that Bond’s fast-paced lifestyle, steadied by a diet of hard liquor and casual sex, is something to be pitied rather than aspired to. The character’s life remains an escapist fantasy, but the polish has worn away, revealing a sad, lonely alcoholic.

The face of Hollywood is changing too. Especially the ogrish face of Harvey Weinstein, whose totally secret (cough) and incredibly surprising (cough) assaults on women seem to have sparked a wave of sexual assault survivors to come forward and share their stories. Suddenly, every celebrity in Hollywood is “shocked and saddened” by the allegations against the sleazy producer who has been openly mocked for his predatory behavior for decades.

Seems like it’s not okay to be a creep in the entertainment industry anymore. And as part of the attempt to scrub the filth off the glossy veneer of Hollywood, James Bond needs to clean up his act too. Because the image of a wealthy, powerful, middle-aged man constantly chasing vulnerable twenty-year-olds is starting to look a bit creepy.

As one of the oldest and most consistent faces of cinema, it’s important that James Bond reflects the supposed values of the industry that spawned him. He’s always going to be the archetypical action man, but that doesn’t mean he has to maintain his misogynistic streak. Bringing Belucci back and expanding her role might lay the groundwork to transform the ultra-disposable Bond girl into a woman, with a more substantial part to play in Bond’s future adventures.

Not to mention, it’s Craig’s last time in the tuxedo. No really, it’s the last time. If he’s forced to do another one, he really will slash his wrists. We all know the character will be modernized and rebooted with a fresh-faced actor the moment Daniel Craig leaves. Craig is undoubtedly thinking of the legacy he leaves behind him, which will soon be the longest-serving Bond in history, overtaking Roger Moore at 13 years.

So it makes sense to not only go out with a bang, but with dignity. Craig’s story has touched on the “aging agent adrift in the modern world” theme several times; finally pairing with someone that shares his life experience and cynical outlook might be the happy ending his grizzled Bond deserves.