Most actors nowadays only give interviews if they have a new project to sell. But Monica Bellucci is not your average actor. Like Sophia Loren, Gina Lollobrigida, Silvana Mangano, she has Italian film-star glamour – dark hair, voluptuous, a sensuous beauty.

Unlike the post-war icons, however, Bellucci has been in regular work beyond her 40s. At 51 she made headlines as the ‘oldest Bond girl ever’ for her role as Lucia Sciarra, widow of a notorious assassin, in Spectre. 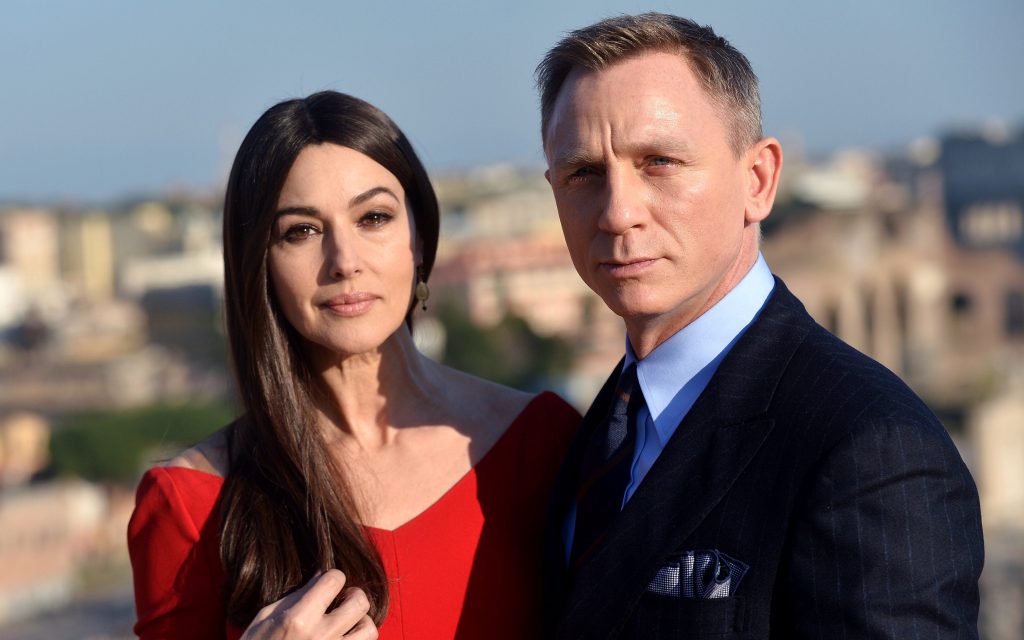 Bond meets Lucia at her husband’s funeral, where she is dressed in 5in heels and a black veil. Their romance is brief but, after all of 007’s trademark conquests of young things in bachelor pads, when the film came out in 2015 it was cause for celebration (except in India, where a kiss between Daniel Craig and Bellucci was deemed too long by the Central Board of Film Certification and duly shortened by half).

We meet in her extremely large and beautiful house in Paris’s 14th arrondissement, where she lives with her two daughters, Deva, 13, and Léonie, seven. A housekeeper invites me into a magnificent sitting room with a high ceiling, large windows and a sumptuous sofa. I hear the sound of other staff in the kitchen.

‘Of course I have people to help me,’ Bellucci says, after she whirls in, chatting 19 to the dozen. She reminds me that she is now a single mother, since the break-up of her 14-year marriage to Vincent Cassel in 2013. She says she’s had to become ‘more structured, more grounded’ since their divorce. ‘I was just emotion before. This is a new part of me I am discovering now in my 50s.’ 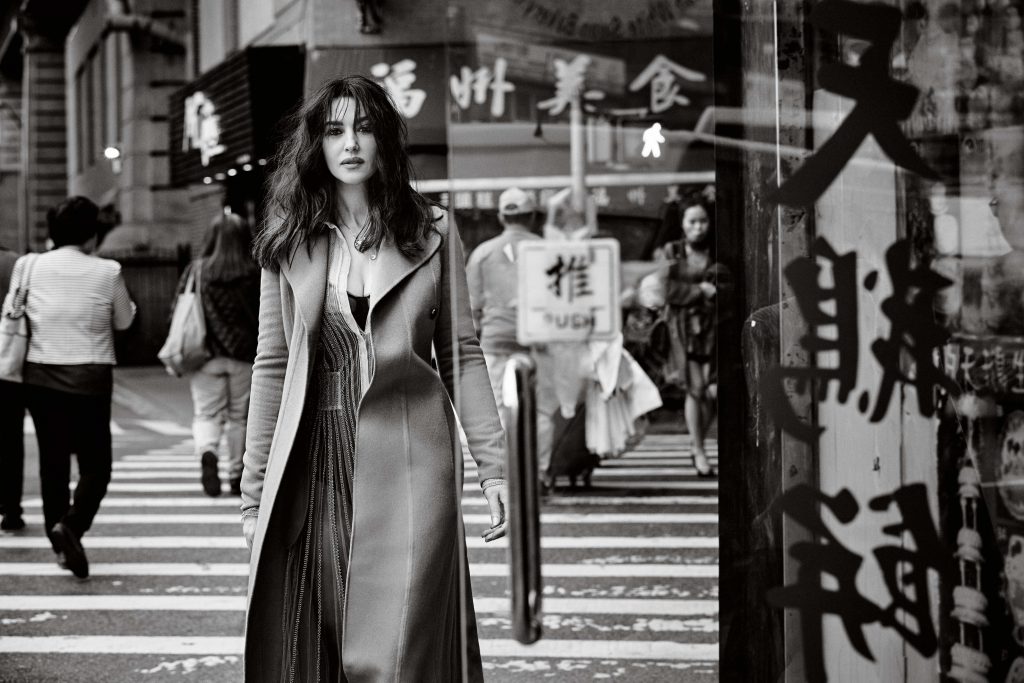 At 52, Bellucci has a compelling voice, is even more beautiful in the flesh than on film, and appears, rather stylishly, to be wearing an off-the-shoulder evening top at 10.30 in the morning. The fake eyelashes, it transpires, are not for my benefit. She was shooting a film yesterday to promote a song she’s made with a leading French singer.

She explains she gets approached for work all the time, especially by photographers, and normally says no. But when Francesco Carrozzini called her for this Telegraph shoot it was different. ‘I knew his mother,’ Bellucci says, referring to the Italian Vogue editor Franca Sozzani, who died last year.

They met in Bellucci’s previous life as a model. ‘She was one of the greatest women I ever met,’ Bellucci continues. ‘Such a strong woman. I had so much respect for her, the way she managed her professional life, her personal life. So when he called me, I said yes. It was a way to be in touch with her. That day we did the shoot in Chinatown in New York, I thought about her a lot.’

Success as a model came before success as an actress, and Bellucci still feels very much at home being photographed. The struggle, she admits, was being taken seriously in films at the start of her career, when in 1990 she was cast in the Italian-language film Vita coi figli (Life with the Kids) by the Italian director Dino Risi after he saw her picture in a magazine.

‘The most difficult period was when I transferred from modelling to acting,’ she has said. Perhaps this is why she has pursued ‘difficult’ roles such as that of a rape victim in the controversial thriller Irreversible, Mary Magdalene in Mel Gibson’s The Passion of the Christ, and the Mirror Queen in Terry Gilliam’s The Brothers Grimm. ‘When you are beautiful and you do something that is very strong, people say you are courageous, but they don’t say you are good,’ she says. ‘Now I am older, they say, “You are good.”’

Bellucci is upbeat about ageing. But then she hasn’t really aged. She hasn’t lost her looks (she credits acupuncture and facial massages) or her figure – ‘I do Pilates and swim, but I don’t wake up at six and go to the gym. Forget it!’ – and has a ready list of inspirational maxims: ‘It is not a matter of age, it is a matter of energy,’ ‘The body gets older but the soul younger,’ ‘You can be old at just 20,’ and so forth. 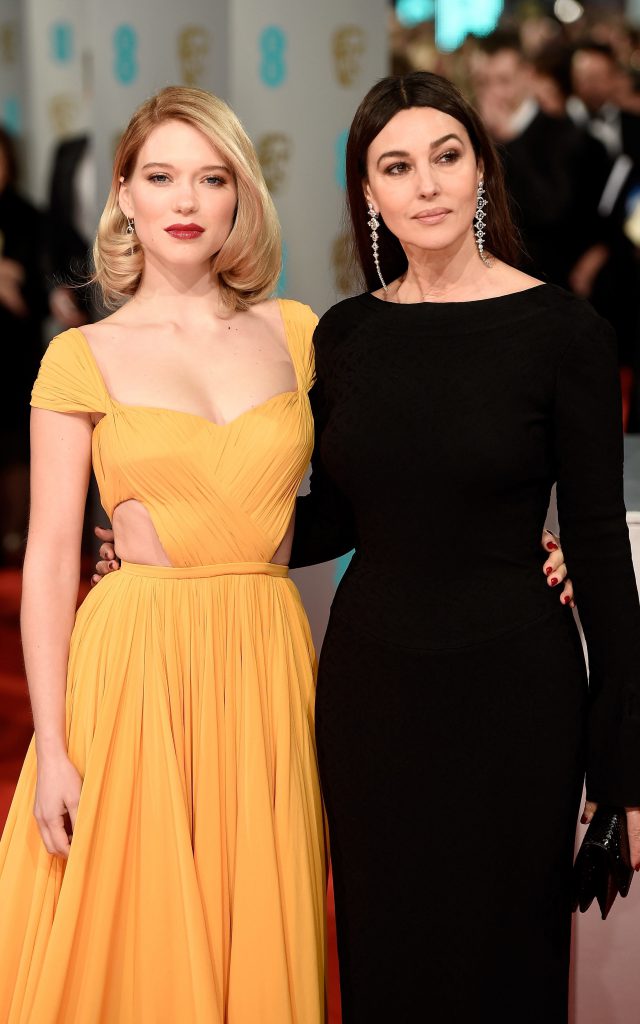 ‘Sophia Loren, Lollobrigida, Silvana Mangano, could exist as icons after 40 but not as actresses. And I think today it is completely different.’ Look at Charlotte Rampling, Judi Dench, Helen Mirren, she says. ‘Women look at themselves in a different way today and because of that we are watched in a different way.’

She’s certainly been busy post-Spectre. She’s appeared in On the Milky Road, a magic-realism film set in the 1990s during the Bosnian War; and the Amazon comedy series Mozart in the Jungle, alongside Gael García Bernal; as well as the Twin Peaks revival (‘It was amazing to work with David Lynch’).

‘These are not stories I could do before,’ she says, delighted with the way life is turning out.

Bellucci grew up in a comfortable family, in the small Città di Castello, on the Umbrian border with Tuscany. Her father, Pasquale, ran a haulage company and her mother, Brunella, was a housewife and amateur painter. Bellucci was an only child – her parents didn’t want another one. ‘They had me when they were very young and although my mother was maternal, maybe she was too young,’ she says. ‘But she did what she could and she did well.

‘I think I missed having a brother or a sister,’ Bellucci continues. ‘That’s why I have two kids, because even though sometimes you can fight, it is better to fight than be lonely.’ She says she had lots of cousins, but remembers at eight or nine feeling very alone.

Her personality – ‘So curious, so open, I want to know things’ – meant that in her early teens she longed for the big outside world. ‘A small town is something that can protect you but at the same time, it made me want to escape and look for other things.’

What happened, of course, was modelling. 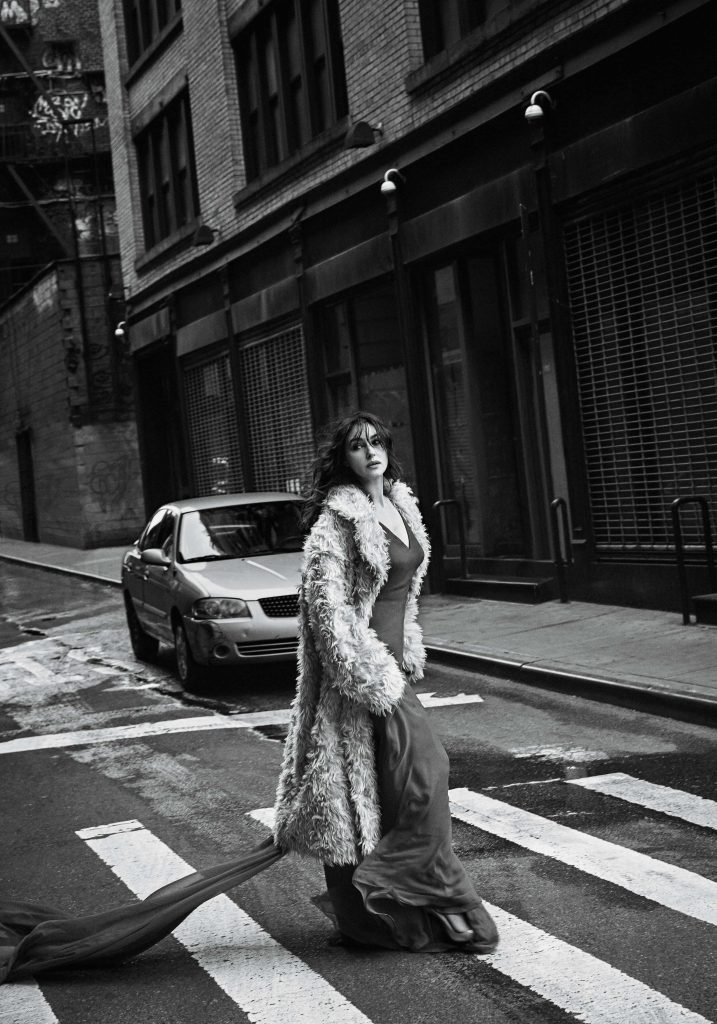 ‘I did my first pictures when I was 13. A friend of the family was a photographer and he said, “Can I have a picture of Monica?” And then when I was 16, another friend of my father, who was into fashion, came and said, “I would like to do fashion shoots with Monica.” So I did a fashion show in Florence and then in Milan, and actually while I was at school, I was doing fashion shows three times a year. And then I became professional when I finished high school at 18.’

Photographs of Bellucci as a teenager (‘I looked like a woman at 13’) show her with red lips, curled hair and a waistcoat that flops sideways to give a glimpse of her breast.

What did your parents think about modelling? ‘Maybe because they were young they accepted it and understood.’ She says her mother, in particular, wanted something more for her daughter. ‘She wanted to push me away. Inside her was, “Oh my God, no, not the same life as me.”’

And so in her early 20s Bellucci lived in Paris, Milan and New York, where she worked in fashion after being signed by Elite Model Management, and partied with her new-found friends. ‘It was like my parents let me be free in a way that was almost incredible, almost maybe too much, but it was great.’ At 25, she married Claudio Carlos Basso, a photographer. The marriage lasted 18 months. ‘I haven’t seen him since.’

‘Modelling came to me naturally, and I loved pictures. I loved the world of image. I didn’t do something I was forced into. When I was young, I had books by Helmut Newton, Bruce Weber; pictures were talking to me from an early age.’

In 1992, two years after Dino Risi was so entranced by an image of Bellucci that he cast her in his Italian TV film, Roman Coppola spotted her fiery sexuality in the Italian magazine Zoom and begged his father, the director Francis Ford Coppola, to offer her a part in his film Bram Stoker’s Dracula.

She played one of Dracula’s brides. ‘It was just a moment, but I had to go to LA,’ she says. ‘I think my dream always was to be an actress, but I was coming from a place where cinema was so far away from me.’ Roman Coppola would not actually meet Bellucci in the flesh until some 25 years later, at the Golden Globe Awards, where Mozart in the Jungle, which he co-created, won an award. ‘He said, “Hey! You have to give me something because I am the one who discovered you.”’

But at 28 she was still just a wannabe, like thousands of models. She took acting classes to iron out her modelling ‘tics’ – ‘the way you walk, the way you talk, you lose that kind of natural way you need for cinema. There is an attitude in modelling.’

Her breakthrough came in 1996 with The Apartment, a moody French film noir about a romantic young executive who leaves his corporate life behind to search for his first love, played by Bellucci. 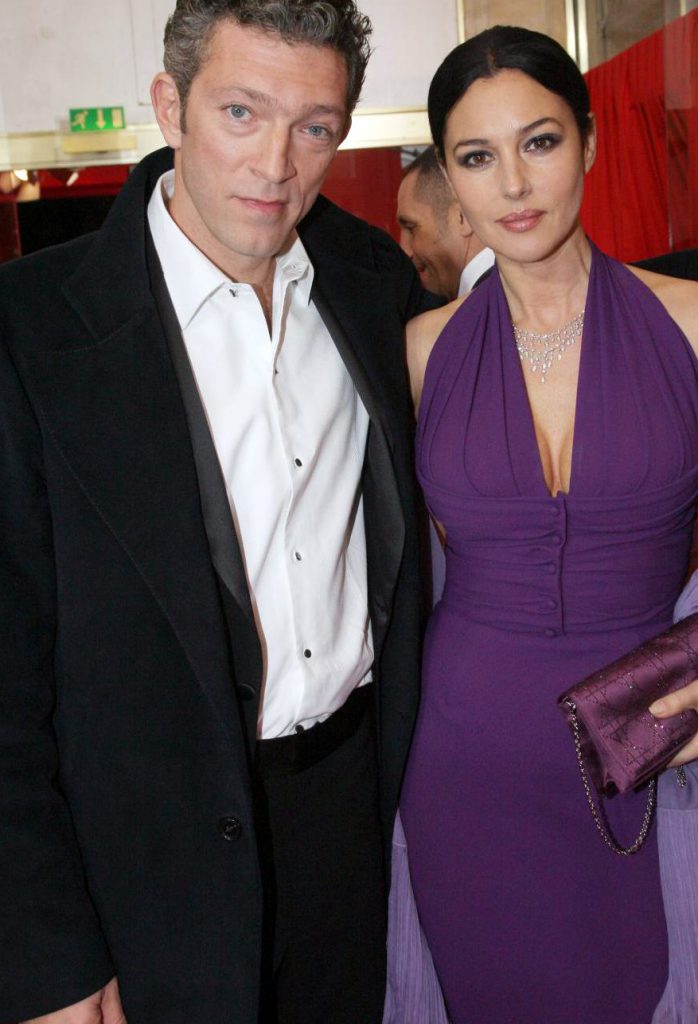 It gave her the recognition she longed for. She was nominated for a César Award for Most Promising Actress, and met her husband-to-be, Cassel, the charismatic French actor best known for his roles in Ocean’s Twelve and Black Swan. Known as Les Glamours, the couple went on to make eight more films together.

Women look at themselves in a different way today and because of that we are watched in a different way
Although they are now divorced and living on different continents – he is in Brazil – she says their relationship is amiable.

‘When you have kids it’s important to have a relationship if it’s possible.’ She says Cassel is a good father but works and travels a lot, so the girls live with her.

Life nowadays is bound up with her children. ‘The fact I had my kids late’ – in her 40s – ‘gives me the freedom to make one film a year and then I can spend the rest of my time with them,’ Bellucci says.

She prepares their breakfast, walks her younger daughter to school; they mostly eat dinner as a family. ‘If I need to go out, I go out, but kids like it when their mother is there.’

She has houses in Rome and Lisbon, a relationship (she smiles, shakes her head and refuses to elaborate) and a new independence. ‘I am completely in charge of my life, 100 per cent.’