The Italian actress also stars in the reboot of David Lynch’s “Twin Peaks,” with the first two episodes of the new series to be presented at the festival on May 25. She will be returning to host the event’s closing ceremony on May 28.

During an exclusive interview with UNIQ at her home here on Sunday, Bellucci confesses to experiencing a slight case of the jitters when the festival’s general delegate, Thierry Frémaux, approached her for the gig, on the year the event is marking its 70th anniversary.

“I said, ‘Oh my God: big responsibility,’” says Bellucci, perched on a blue velvet sofa in a wood-paneled salon of her homely abode.

Its décor is a mix of original features, like stained-glass windows and moldings, with walls covered in rich floral-printed fabrics, jewel-toned furniture and artworks ranging from portraits of female icons like Sophia Loren and Marilyn Monroe to a painting of “la Madonna,” a.k.a. the Virgin Mary. (The actress playfully performs a quick “Ave Maria” before posing for a picture in front of the latter work, which she describes as a “symbol of maternity.”)

Bellucci moved into the three-story town house two years ago following her divorce from French actor Vincent Cassel, which in French entertainment circles was perceived as a split of Brangelina proportions. “I like the past — maybe there’s part of me that’s a bit melancholic and romantic, and for me this house is romantic. It’s a mix of Italy and France,” says Bellucci of the home she shares with their two daughters, Léonie and Deva. 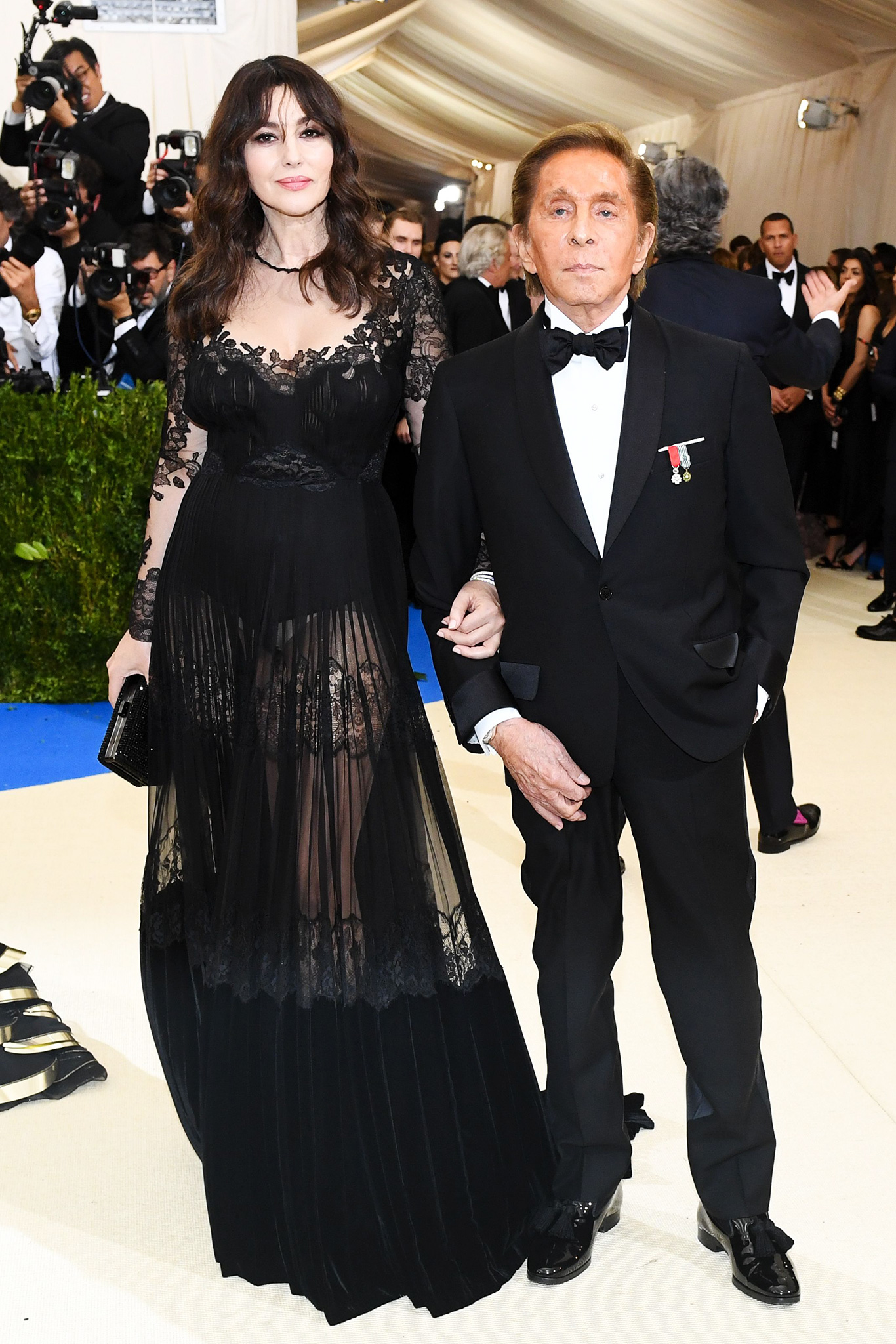 Dressed in a curve-hugging black knit dress by Alexander McQueen, the actress, with her classical beauty, oozes dolce vita glamour, but is quick to brush off such allusions, saying she likes to keep her style effortless. “Maybe unconsciously it’s very Italian. I use simple lines most of the time because my body is shapely, and change the colors, but my style is quite classic. When I pick up my daughters from school, I wear a T-shirt and jeans,” she shares.

Bellucci, who modeled through to her mid-20s before pursuing an acting career, attended the recent Met Gala in New York on the arm of Valentino Garavani — “the epitome of class.” But when asked who her favorite designers are, she replies: “There are too many to mention. I don’t follow fashion as such, but I look for fashion that works for me.”

Even in hanging-at-home mode, glamour comes naturally to Bellucci. Before getting ready for the shoot, the actress snacks on mini croque-monsieurs in her kitchen, dressed in a red and white kimono with Christian Louboutin mules (she recently bought a residence in Portugal, near Louboutin’s home.) In full-on “mamma” style, the actress passes around cakes.

At the table, her personal assistant, Silvia, sits patiently removing modeling clay — the handiwork of one of Bellucci’s daughters — from an Azzedine Alaïa belt with a fork as the team gathers round the television to watch the French presidential inauguration, exchanging comments.

For hairdresser John Nollet, France’s new first lady, Brigitte Trogneux, could have done with a fresher, more natural ’do; Bellucci praises her “great legs,” saying: “I think they make a lovely couple.” But for all the banter, the event, says Bellucci, whose eldest daughter goes to school near to where one of the recent terrorist attacks took place, sends a strong message of hope.

“French people with this vote really proved they needed a big change, and young people love [Emmanuel] Macron so much. It shows that you don’t have to be old to make things happen, it’s a symbol that maybe we should have more confidence in youth, which is beautiful,” she says.

Finding beauty in hard times is the theme that drives her latest movie, “On the Milky Road,” directed by Emir Kusturica and billed as a love story between a Serbian milkman (played by the director) and his Italian-Serbian object of desire, which is her character. With past film roles that have included Mary Magdalene in “The Passion of the Christ” (2004); a Bond “girl” — at age 51 — in “007 Spectre” (2015), and an opera singer for the 2016 Amazon-funded series “Mozart in the Jungle” — Bellucci had to learn to speak Serbian for her latest incarnation.

Finding beauty in hard times is the theme that drives her latest movie, “On the Milky Road,” directed by Emir Kusturica and billed as a love story between a Serbian milkman (played by the director) and his Italian-Serbian object of desire, which is her character. With past film roles that have included Mary Magdalene in “The Passion of the Christ” (2004); a Bond “girl” — at age 51 — in “007 Spectre” (2015), and an opera singer for the 2016 Amazon-funded series “Mozart in the Jungle” — Bellucci had to learn to speak Serbian for her latest incarnation.

“The Balkans is a very dangerous place, there’s this sense that it can all kick off at any moment. It’s a land full of beauty, but also so much sadness because you feel the war. Even though it’s not there, it’s palpable,” she says. “Kusturica does those films where you feel the duality of reality and poetry because through the poetry, it’s as if you can exorcise darkness and things such as a war.”

For her next project, Bellucci, who has appeared in films directored by Francis Ford Coppola, Sam Mendes, Spike Lee and Gaspar Noé, among others, plans to produce a film about Communist Italian photographer Tina Modotti, who was active from the Twenties to the Forties.

“I’m fascinated by her modernity and courage. She was so poor but had the courage to go to America and travel around the world to Mexico, Russia and Spain during the civil war. She was a muse to many artists, from Edward Weston to Pablo Neruda to Diego Rivera, and from muse she became an activist, and a great photographer. She was a woman of passion with a freedom of spirit which, for the time in Italy, when a woman could not exist without a man, was so pioneering.” 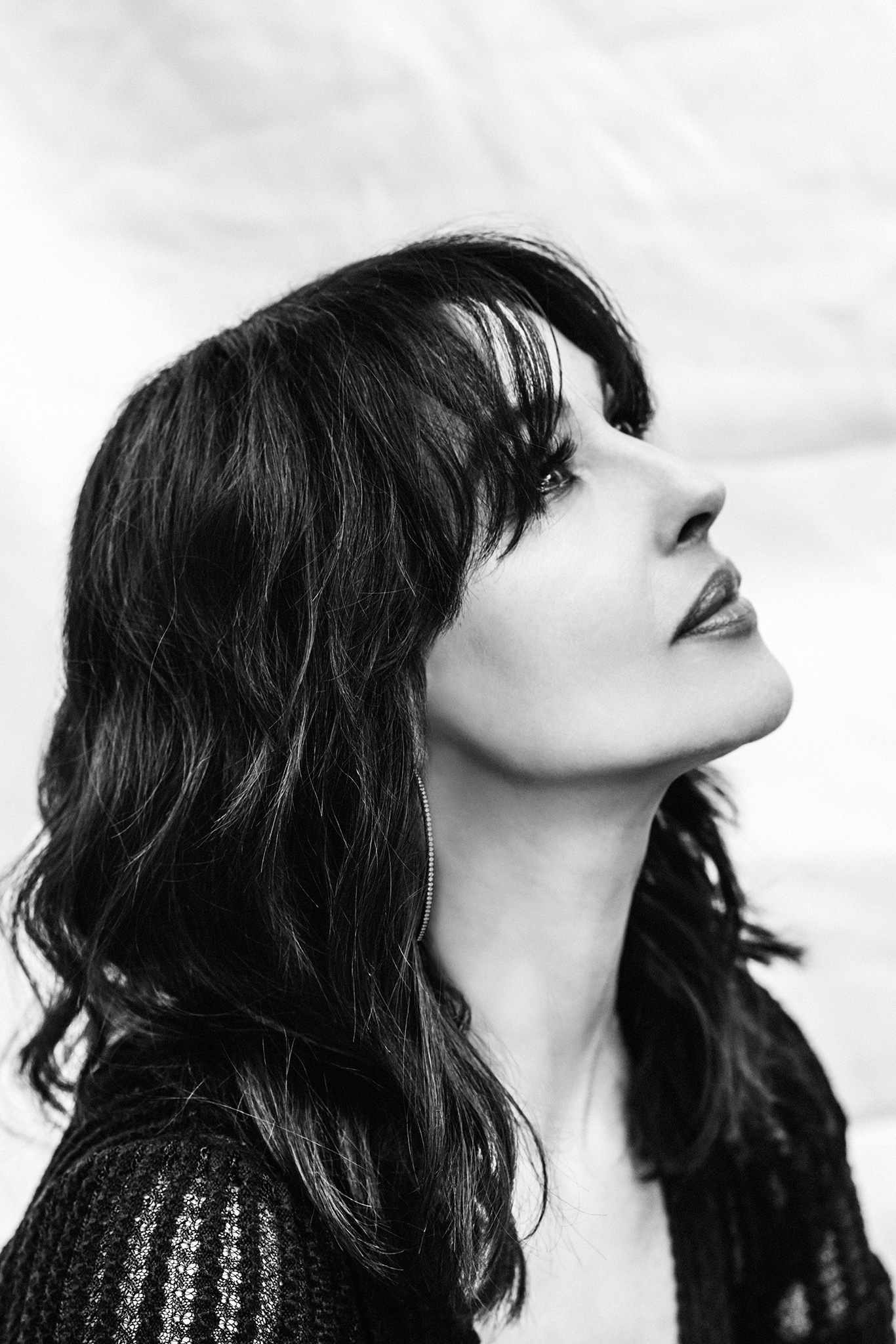 Of her role in the “Twin Peaks” reboot, Bellucci demurs: “All I can say is that I’m part of the cast and that I like what is blurred, because I’m a curious person. The world of David Lynch is all about discovery.”

She says it was a “sign of the times” that this year’s festival is so strong on female talent, with 12 female directors in the official selection, Claudia Cardinale on the festival poster, and Pedro Almodóvar, “who has made so many films dedicated to women,” president of the jury.

“As a child, I used to dream about all the Italian leading ladies like Sophia Loren, Silvana Mangano and Monica Vitti, but at the time, for actresses all over the world, regardless of their beauty and talent, after 40 it became so difficult to hold on to a career. And now things are changing,” she notes.

“I live in France where there are all these incredible actresses like Isabelle Huppert, Catherine Deneuve or Nathalie Baye, and in England you have Helen Mirren and Judi Dench. In James Bond, I was in it for maybe 15 minutes, but there was such a strong reaction to the role because it was the first time in history that a [mature] woman was in James Bond’s arms.”

On choosing to live in France, Bellucci says: “Italy gave me this sense of maternity, but women in France taught me this sense of freedom. Even if I love Italy and the femininity of Italian women, and I am profoundly Italian, in France I realize how much women fought for their rights. That’s why there are all these interesting writers and directors. Little by little things are changing in Italy, but we come from a Mediterranean culture, and a macho culture, and to come out from that takes time.”

Bellucci says she’s grateful for the range of projects and directors she has worked with, recalling the “stereotyping” she experienced in her mid-20s when she made the transition from modeling into acting, as “one of a million girls” treading the same route.

Her breakout film was “L’Appartement” in 1996, on which she met Cassel and which led to her first American project, “Under Suspicion,” also starring Morgan Freeman and Gene Hackman, and subsequently her first Cannes Film Festival, in 2000. Without the festival, her career, she says, “would not have been the same, and each time was a different experience.”

“My first time was such an emotional rush — the red carpet, the photographers, all the people screaming,” recalls the actress.

“It’s like a big arena, the Colosseum, and you’re in there with the lions. If a film is liked, it’s great, but when it’s not well received, you get all the reactions. That’s what happened in 2002 when I went with ‘Irreversible.’ Many loved it, and others hated it; people were walking out of the cinema,” she says of the film, in which her character is raped during a 10-minute scene that many critics found unwatchable.

“Years later, it became a cult film, which proves that to really judge a movie, it has to come out from the context and be given time to see if it sticks,” she remarks.

“Cannes is art, culture, glamor, industry. And also we have to think about all those movies made on zero budget in difficult conditions and through these directors who have the courage to make these movies, we get to discover culture that, without Cannes, would be impossible,” adds Bellucci.

“Just from my simple experience, I’ve been in Cannes with ‘The Matrix Reloaded’ [2003], for example, but also with ‘Irreversible, or The Wonders’ [which scooped the Grand Jury prize in 2014], by Italian director Alice Rohrwacher, and those are very intimate movies that, without Cannes, would not have existed. Through Cannes they made an international career and were sold all over the world. Cannes is one of the most important festivals that allows for so many unique movies to exist.”