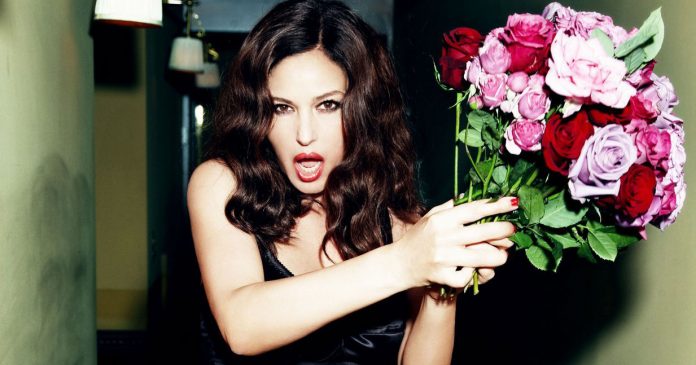 Monica Anna Maria Bellucci is an Italian actress and model. She is often considered among the most beautiful women in the world. Monica Bellucci and her father. Monica Bellucci in Italy to promote her film ‘Manual of Love 3’ with Robert De Niro and directed by Giovanni Veronesi.

Monica Bellucci started modeling as a teenager. After working as a model, she appeared in Bram Stoker’s Dracula and The Apartment. Bellucci’s film career began in the early 1990s. In 1996 she was nominated for a César Award for best supporting actress for her portrayal of Lisa in The Apartment and strengthened her position as an actress.

In 2003, Bellucci appeared in the hit science-fiction sequel to the The Matrix, The Matrix Reloaded, as Persephone. Her on-screen liplock with co-star Keanu Reeves was hot enough to earn the pair a nomination for best kiss at the MTV Movie Awards. According to two national newspapers, Italian is considered to be a sex symbol. Bellucci then turned her attentions to all things Biblical with the Mel Gibson-directed The Passion of the Christ (2004), playing Mary Magdalene to Jim Caviezel’s Jesus. This was followed by the fantasy-action caper The Brothers Grimm (2005), in which Bellucci played the Mirror Queen opposite Matt Damon and Heath Ledger as the title characters. She studied law for a short while before deciding to go into modeling.

She married photographer Claudio Basso in 1990, but the pair divorced in 1994.

Bellucci went on to juggle Hollywood roles with parts in European films as well. She starred in Under Suspicion (2000) with Gene Hackman, and that same year she received accolades for her dramatic performance as a wife separated from her husband by war in the Italian language film Malèna. She married Vincent Cassel and the couple had two daughters, Deva in 2004 and Leonie in 2010, before separating in 2013.

While she was pregnant with her daughter Deva in 2004, she posed half-naked for the Italian Vanity Fair magazine (April 2010 issue) to protest the Italian law against sperm donations. In 2012, it became the advertising face of Dolce & Gabbana.

Bellucci later starred opposite Rachel Weisz in the 2010 true-life drama The Whistleblower and the 2011 Italian romantic comedy The Ages of Love with Robert De Niro. She also made headlines when she was selected to star opposite Daniel Craig as the next “Bond Girl” for Spectre (2015)—making her the oldest woman to play the superspy’s paramour in the James Bond film series.

Bellucci went on to juggle Hollywood roles with parts in European films as well. She starred in Under Suspicion (2000) with Gene Hackman, and that same year she received accolades for her dramatic performance as a wife separated from her husband by war in the Italian language film Malèna.

Her favorite movie is A Special Day by Ettore Scola. Sophia Loren and Claudia Cardinale are her favorite actresses. His passion is acting and also she can sing.

Monica is date before 2019 with Telman Ismailov a businessman and entrepreneur of Mountain Jew origin.